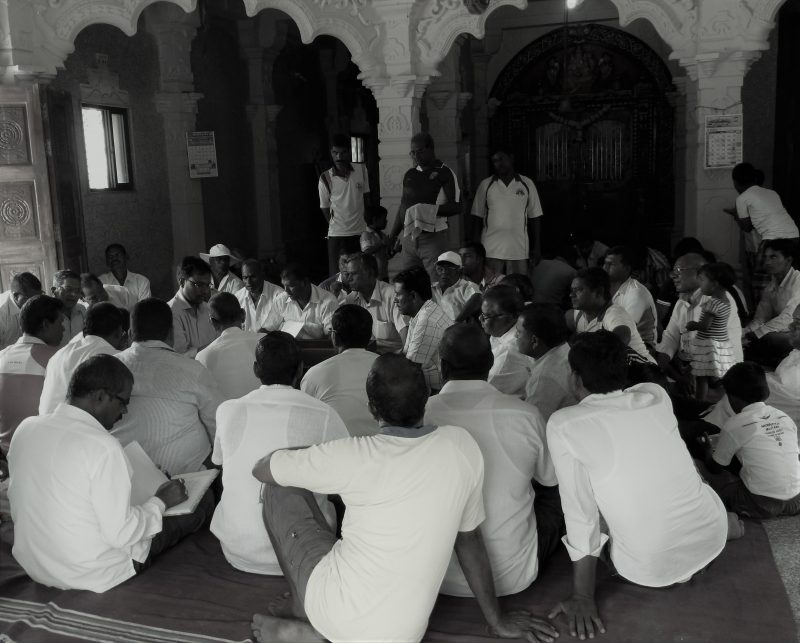 Note: This is an excerpt from the book State Law, Dispute Processing and Legal Pluralism: Unspoken Dialogues from Rural India (Routledge, 2019) by Kalindi Kokal

Memories of Disputes and Rituals of Gossip

Disputes, as a type of conflict, are “essential to society and not necessarily, anti-social to be utterly removed” (Coser 1956; Sandole 2011). Disputes were perceived by the communities as ‘hiccups’ in the order of everyday life [1]. They were distractions, but only momentary in nature and rarely interfered with the overall progression of an individual’s or community’s life. Like hiccups, some disputes were tackled quickly whereas certain other types tended to persist. However, as Felstiner, Abel and Sarat (1981, 639) highlight, “people never fully relegate disputes to the past, never completely let bygones be bygones: there is always a residuum of attitudes, learned techniques, and sensitivities…”.

An interesting consequence therefore was that disputes left impressions, which many times remained like vivid memories (Nadel and Sinnott-Armstrong 2012) recollected on many occasions as part of reflections of interpersonal relationships or in order to emphasise those relationships that were either undermined or fortified in the process. Below is an excerpt from the book State Law, Dispute Processing and Legal Pluralism: Unspoken Dialogues from Rural India (Routledge 2019) that elaborates the rituals of gossip that surrounds memories of disputes.

“Gossip”: The Dialogue about Disputes

Disputes constituted an important element of gossip in both these communities (see also Ishwaran 1964, 238–39). Gossip, as a mechanism of “information management” (Paine 1967) often led to disputes being discussed at great length. On a rainy day or when the men would return from several days at sea, a group of men would often gather in puḍhārī Ravindra Pavshe’s living room to chat and catch up over cups of tea. After brief conversations about the fishing business that week, the best sale at the auctions and the state of each other’s boats and businesses, conversations would linger on to discuss the troubles or disputes (bhāngaḍi) in the village in the days gone by. It was usual that the bhāngaḍ most discussed would involve or pertain to an individual someone or everyone in the gossiping group knew very closely or was even related to (see also Punekar 1959, 34; Gluckman 1963, 312).

What was common to both field locations was that a dispute would come into the limelight, only if it became a tamāshā. The performance of a dispute (Kokal 2018) is often crucial in determining whether a dispute will become the focus of community gossip and attention. Like all performances, those concerned with disputing and dispute processing could also have a theatrical element, one that is exaggerated, either in form or content or both, to the extent of being almost unreal. In Hindi or Marathi language such theatrics are referred to as a “tamāshā”. The term tamāshā does not find a direct translation in English but could be generally understood as an act or series of acts that result in the creation of a spectacle or a dramatic scene. The act may become a spectacle because of the “actual physical performance” the actors might undertake or because of the content and style of dispute processing that sets it apart from the ‘ordinary’.[2]

Disputes were often perceived to turn into a tamāshā when there had been a necessarily public exchange of verbal abuses and insults or some physical assaults or when either party may have approached the police station or a local leader in the event.[3] In other words, the dispute had become more public than being only a matter between individuals. For instance, it was known in Melatpur village that Kamla’s husband was a drunkard and often became very violent towards her.[4] But the story about Kamla’s husband that became a subject of community gossip was the day on which he appeared drunk outside her workplace and began hurling abuses at her boss. “Dadda (big brother, here referring to her employer) filed a complaint in the local police station against him and Kamla actually slapped her husband to bring him back to his senses before she dragged him back home,” recollected Kavita Bhauriyal, a weaver at the NGO – who had witnessed this tamāshā – during an early morning chat with her neighbour. The subject of Kamla had casually come up and the reference to her plight because of her alcoholic husband had almost immediately been touched upon. The recollection of this particular incident remained common to many narratives in Kamla’s workplace campus.[5]

On the whole, for their expatiated form of expression and fairly flagrant style of communication, tamāshā-s arising from disputes were perceived to bring beizzati or damage social standing and were often equated to ‘washing one’s dirty linen in public’. Therefore, the more respectable a person or household was, the more cautious they were of being associated with a dispute related tamāshā. And consequently, people creating a tamāshā or those involving themselves in it were rarely looked upon favourably.

A dispute could become a tamāshā for several reasons; sometimes to bring the issue into ‘public’ space, or because it was the intention of one of the parties to the dispute to ‘make a statement or a point’, or merely to test boundaries and see how far one could go. For instance, in Gonjhé, a dispute turning into a tamāshā was quite common and I observed this to be more a defence mechanism than anything else. Fisherwomen more than men were popular for creating a scene, which typically included the hurling of obscene verbal abuses and a whole lot of shouting and screeching and sometimes a threatening with the scythe (koytā). A prominent consequence of these tamāshā-s was that the men in the community always remained wary about getting into an argument with the fisherwomen, and even if they did, accusations or the show of power was often retracted at the slightest hint of a tamāshā. It secured the fisherwomen from being taken advantage of – emotionally, financially or physically – by customers, relatives and competitors. With their men, in particular, this worked to counter-balance the gendered power equations.

The bigger the tamāshā, the more vividly gossip sessions recollected it throwing light on (and allowing me an insight into) the cause of the dispute, its history, the general reputation of parties involved in the dispute and sometimes that of even their families. Additionally, these discussions also elucidated the manner in which the disputing parties, their responses to a dispute and the method by which the dispute may have been resolved (if at all) were perceived by the community members. Gossip as a catalyst of social process may work to avoid a disputing situation or exacerbate it; either ways it sets into pattern a range of issues that may have until then been perceived by people in a rather blurred or vague form (Paine 1967, 283). All of these factors in a discussion of the nature of gossip, therefore, had a crucial impact on the manner in which a dispute was processed or advised to be settled by acquaintances of the disputing parties as well as the local leaders in the community, if their help had been sought or authority had been stimulated (see also K. von Benda-Beckmann 1981, 131).”

[1]: The intention here is not to equate disputes with an “illness” of any sort by referring to this perception of the community, but in fact quite the opposite. Disputes were largely viewed as minor breaks in the everyday order of things, not too important to receive a lot of attention and energy, but nevertheless some disputes made themselves unable to be ignored entirely.

[2]: The term ordinary here is placed into quotes because what comprises the ‘ordinary’ may differ in every community and context.

[4]: Kamla’s case-study is described in further detail in Chapter 4.