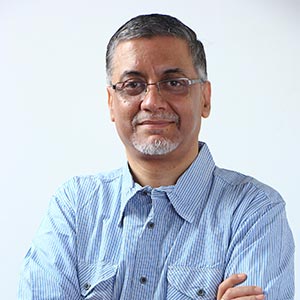 Professor Mehra is a chemical engineer. He joined IIT Bombay in 1991 in the chemical engineering department and became an associate faculty in CPS in 2016. He has been a Visiting Professor at the Massachusetts Institute of Technology, Cambridge and has been associated with many other institutions in various capacities: Summer Visiting Professor at IIM Bangalore, CASI Visiting Scholar at the Center for Advanced Study of India (CASI) at the University of Pennsylvania, and a Visiting Scholar at the University of Groningen, The Netherlands. He has also been a Summer Visiting Scientist at Unilever.

Professor Mehra’s engineering research interests are in the broad areas of reaction engineering, surface science, and nanomaterials, and his work has been published extensively. He has won many awards such as the INSA Young Scientist Medal of the Indian National Science Academy, Associateship of the Indian Academy of Sciences, the Marie Curie Fellowship of the European Commission, and the Excellence in Teaching Award at IIT Bombay. He is a Fellow of the Indian National Academy of Engineering (INAE) and the National Academy of Sciences India (NASI). He has served as a member on the Department of Science & Technology (DST-SERB) Programme Advisory Committee on Chemical Engineering, and was the Chair of the SERB Programme Advisory and Monitoring Committee on Carbon Sequestration. He is currently Chair of the SERB Committee on Early Career Research Awards and National Post-Doctoral Fellowship (Engineering Sciences). He was also a member of a sub-committee of the Planning Commission (12th Plan) on Student Financial Aid. He has been a consultant to several industries as well as an industry teacher.

Prof Mehra has had an abiding interest in political and social issues relating to education, labour, science & technology, and the digital economy. He has been involved in supervising the Technology Development Supervised Learning (TDSL) projects at the Centre of Technology Alternatives for Rural Areas (CTARA). He now brings these interests and professional experience to CPS.

Professor Mehra has held several senior administrative positions at IIT Bombay: Head of the Computer Centre, Chair of the Department of Chemical Engineering and Professor-in-charge Administration, and he was responsible for initiating major administrative reforms in the Institute.

Impossible Things and What They Taught Me About TV News Shows , Sept 18 2020

TThe Self-Righteous Battles of ‘WhatsApp Scholars’ and What I Learned from Them , Aug 19 2020

The Far From Magnificent Obsession With Ranks At IITs , June 29 2020

The Pragmatics of Online Teaching , June 4 2020

Contact Tracing, Location Data Markets and the Perils of Being Tracked , May 14 2020

Will Bluetooth and Aarogya Setu Allow Us to Safely Exit the COVID-19 Lockdown? , April 29 2020

IIT-Bombay’s Adaptation To The Lockdown – What Works And Doesn’t , April 7 2020

How Digital Media Weaponised Ignorance During a Pandemic , March 28 2020

Indian Universities And The Problematic Race For Eminence , Aug 13 2019

Higher Education Is No Wonderland, but Does the New Education Policy Know? , Jul 30 2019

Infocalypse now: How can media users protect themselves from the fake news superstorm? , Jul 26 2019

Technology as the Villain: The Political Economy of Digital Hate , Apr 28 2019

Pseudoscientific Claims Are Irrational – but That’s Not Their Biggest Danger , Apr 20 2019

Are we hurting learning and teaching by diverting funds from blackboards to digital boards? , Apr 08 2019

Before this Year’s Board Examinations, Learn the Real Reason India is a “Student Superpower” , Mar 1 2019

Special Invited Lecture: “The Dismantling of Public Institutions and the End of History: The Case of Education”, at the International Conference on “Institution, Structure & Organization in Globalizing India: Science & Technology, Economy & Society”, January 20-21, 2012, Indian Institute of Technology Bombay.