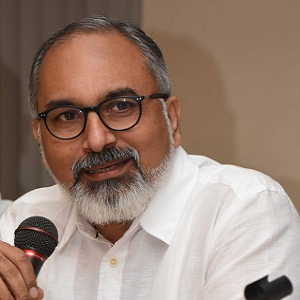 N C Narayanan works on water, sanitation and climate studies with a focus on the policy and governance aspects. At IIT Bombay, he currently heads the Ashank Desai Centre for Policy Studies that offers Masters and PhD programmes in public policy. He was also part of developing the Technology and Development program at CTARA and the interdisciplinary program on climate studies at IIT Bombay. He is an Adjunct Professor at the National Institute for Advanced Studies (NIAS), Bangalore; was a Fulbright Visiting Fellow at the University of California, Berkeley and Visiting Faculty at the Universities of Lausanne, Switzerland; and Monash, Australia. He has served as member of government committees including working groups of the National Planning Commission and Kerala State Planning Board.

He started his career as a hydrogeologist and was part of an interdisciplinary team for land use planning through remote sensing studies. Later he received an M Phil in Applied Economics from the Jawaharlal Nehru University (CDS) and PhD in Development Studies (ISS, Erasmus University, The Netherlands). He has been faculty at the Institute of Rural Management Anand (IRMA), Senior Fellow and Executive Director of the South Asia Consortium for Water Resources Studies (Saci WATERs) Hyderabad.

Topic A: Water Sector Reforms: A Study of Policy Process in India

Specify Topic: Both for PhD/MPP

Description: The reforms in the water sector are essentially about reimagining the role of the state, buttressed by the discourse of state failure and the associated ill effects on the sector when the state is the service provider. The power of the legitimizing discourse that comes with reforms – advocating more market and less state – and understanding the particular ways in which pertinent issues came to be framed is critical to understand how the process of policy change unravels on the ground. Taking as its starting point a critique of linear version of policy making, Asthana (2009) illustrated how and why particular types of knowledge, practices and values get established in policy as well as the complex interplay of knowledge, power and agency in water policy processes. Gautam Ganapathy’s PhD study (CTARA) identified two approaches that are predominant among existing studies of water sector reforms: (a) that adopts a neo liberal perspective that attribute failure in achieving desired outcomes to the “sluggish” pace for reforms in the sector and (b) that views reforms as an enterprise of capital accumulation, with multinational interests from the global North foraying into the drinking water sector in the third world. While this critique is useful and much necessary as it mobilises popular action, it lays all the blame on the apparently omnipotent and irresistible force of neoliberalism.

A more useful approach was to map the ‘governance in practice’ at the sub-national level, especially how the state public utilities negotiate the reforms. Along with that, the agency of several non-state actors and the modalities through which they derived it required to be studied. Thus, understanding governance changes demanded a focus on the process dimensions of policy where the various global and domestic economic interests interacted with the existing institutions to mainstream policy priorities associated with reforms. Taking cue from these studies, the proposed study will map the policy process since 2011, especially the paradigm shifts (Shah, 2014) imagined in the XII Five Year Plan and its aftermath. It will particularly look at how the normative concerns, institutional imaginations, data gathering/analysis/availability has all shifted in the past seven years. The insights and shared framework of Asthana (2009) and Ganapthy (2020) will be refined to understand the water policy process in the last decade.

Topic B: Non-Sewered Sanitation for a Cyclical Economy: Policy and Local Governance Challenges

Specify Topic: Both for PhD/MPP

Description: Increased urbanisation of Indian cities has resulted in augmented demand for water and 80% of this is turned to wastewater. With only 37% of the wastewater treated in the country, apart from environmental pollution, we are also losing valuable usable nutrients. Since the colonial period, the centralised approach – centralised infrastructure, control and planning – has been a preferred choice of policymakers to manage the wastewater. The official discourse highlights the Government of India’s commitment to a centralised approach through funding, capacity building, designing administrative routines, and promoting institutional practices. Such measures are the result of a technocratic policy analysis that overlooks normative concerns of inclusion, affordability, and sustainability due to the continued preference of contextually divorced ‘one-size-fits-all’ centralised infrastructure in urban sanitation. Questioning the dominance of the centralised approach, alternatives first emerged as small scale natural technologies in the context of marginalised settlements in urban areas and private institutions in the early 1990s. Later it emerged as an alternative approach integrating principles of subsidiarity, city level participatory sanitation planning, decision making by urban local bodies, and range of technology options etc. These got mainstreamed into policy documents like the National Urban Sanitation Policy (NUSP)-2008, Eleventh Five-year Plan (2007-2012) and the approach paper to Twelfth Five year Plan (2012-17). However, in practice such alternatives failed to scale-up to city level. Neelam Rana’s PhD thesis (CTARA) examined the policy process of the dominance of the centralised approach with the influence, especially funding priorities of international financial institutions in ensuring such continuance until 2014. The proposed study will map the deepening of the process in the last seven years with target-oriented flagship programmes with massive financial outlay that raises sustainability of the infrastructure created from technical, financial, institutional and social grounds. Simultaneously there are experiments rooted in local governance and a cyclical economy that brings out possibilities of inclusive and sustainable sanitation options. A close look of the policy process at local, state and national levels of these is needed for a transition to a more inclusive and sustainable sanitation governance in the country.