Fellow’s Blog: Fake news from the Hinterlands: A study of Hindi News Media. 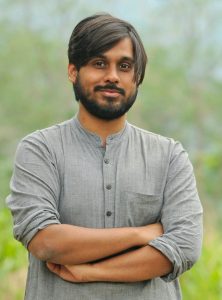 In a 1925 article titled ‘Fake News and the Public’, Edward McKernon, then superintendent of the Eastern Division of the Associated Press, wrote, ‘Advantage has been taken of every device of wit and science to speed up the [news] report until the swift transmission of news is in itself a source of unprecedented danger. The conclusion of Sophocles that “a lie never lives to be old” was reached before the days of instantaneous communication and multiple presses.’

Of course, McKernon wrote this piece almost a century ago, and the device of ‘instantaneous communication’ he spoke of was the Telegraph (McKernon 1925). ‘Put your finger on it in New York, and it vibrates in San Francisco,’ he wrote of this new state-of-the-art technology; and then, squarely implicating the journalists, ‘misinformation is still circulated in the guise of news, and the dishonest reporter operating on a big scale is a greater menace to society than ever before.’

In the decades since, there have been tectonic shifts in the media – in the sourcing, form, mechanism of transmission, impact and legacy. The changing contours of the media and its consumption have also given rise to scrutiny on the role of media in shaping policy and the increasingly symbiotic relationship between journalists and state actors.

As noted by Strömbäck and Esser (2014), this phenomenon of ‘mediatization’ has left few facets of modern life untouched. Media isn’t simply a source of information for citizens and an avenue to shape opinion but an active ingredient of public life through which various stakeholders interact and influence each other. Simply put, the media cannot be treated as a purveyor of passive narratives but an active player that is helping state and non-state actors in shaping policy, pushing political priorities and testing ideological frameworks.

Media and democracy have been described as ‘a couple walking hand in hand’ (Trappel and Nieminen, 2018). Trappel and Nieminen imply that there is an intimate relationship between media and democracy; and that the proper functioning of one will ensure the proper functioning of the other. In a deliberative democracy, the media’s role is as much that of a facilitator for an informed and active citizenry; as it is a platform for public deliberation and debate. It is thus that commentators have observed that the increasing commercialisation and privatisation of media and communication industries poses a significant threat to the ideals of deliberative democracy (Feintuck and Varney, 2006).

In mediating the delivery of information from the institutions of state power to those the social contract gives the state power over, the media has massive influence in the manner in which the governed learn about the governors and even elect the governors. This undue influence that the media now has on democracy and political institutions is what has been termed as ‘mediatisation’ (Mazzoleni and Schulz, 1999; Strömbäck and Esser, 2014) and requires immediate attention. In the tussle between public service news broadcast and market forces within the news media landscape; policy makers must ensure that they step in to tread the fine line between upholding the ideals of a free press and ensuring that at the very least, in the pursuit of profits, news media does not actively disrupt the smooth functioning of democracy. The spectre of misinformation and fake news now threatens to do the latter, especially in countries as large and as diverse as India, making it a space that might urgently require policy action.

This article aims to understand the journalist at the source of the news gathering cycle in India. In many circles, the word ‘media’ often invokes images of English television news anchors or editorials written in English dailies published in Delhi. But this is only a tiny sliver of the media pie in India.  In the north Indian, Hindi-speaking heartland, for instance, the penetration of Hindi language newspapers, television channels, and their attending social media channels (YouTube, WhatsApp, etc) far outdo official circulation numbers.

This article is part of a larger ongoing effort to understand the current media landscape in India that is removed from the metropolis, with a focus on the various constraints that are faced by journalists — especially those who work in vernacular mediums and away from the support structures of big cities. This research into the working of local journalists in vernacular media will directly feed into a larger project at CPS of analysing the policy landscape of misinformation.

The attempt is also to understand how misinformation ties in with growing majoritarian sentiment and hardening caste attitudes in India – and the impact of these rapidly changing forces on the nuts-and-bolts of information gathering. To be sure, almost all of the people approached were upper-caste, an overwhelming majority were Hindu men, and there were a small number of women. I believe this represented the cross-section of reporters and stringers often encountered on the ground and also represented the ones with most institutional access, reach and share of employment.

Journalists working in major Hindi language media houses were approached in September and October for semi-structured interviews on their experiences of covering major incidents of caste-based or communal incidents. Broadly, for the incidents, the 2018 Kasganj communal riots, the 2020 Hathras rape and murder case, the 2020 Sushant Singh Rajput case and the 2017-8  braid chopping incidents were chosen.

In the interviews, broadly four patterns were noticed:   The most glaring aspect of the work of these regional reporters or stringers was the unstable nature of their work. The precarity of livelihoods in these situations, where reporters worked for meagre amounts of money, and most times didn’t even have a regular salary (they are usually paid per story) was stark.

In several conversations with local journalists, one of common themes that emerged was the dangers of social and economic vulnerability in which they function. Their ‘field’ is a fraught space in which other reporters are as much their collaborators (in terms of resources shared, living in the same ecosystem, etc); as they are rivals (who must compete for meagre payments from local, national, and if very lucky, international news agencies and publications). They must then also make the deliberate choice of whether or not it is prudent to report certain stories, in case it jeopardises their chances of getting more stories from certain spaces, sources, and networks.

Another important aspect of their work was the problems they faced in verifying information from the police and authorities in times of emergencies, especially if the narrative of the victim’s side was contrary to that run by right-wing groups or elements close to the ruling political dispensation.  In one case, no information was verified by the police and the only information available was that which was being disseminated by right-wing groups. The police refused to brief the media, and consequently the right-wing narrative was given an open field.

A third finding was the glaring lack of diversity in vernacular reporters. Since Dalit reporters were rare, caste crimes were almost exclusively covered from the perspectives of oppressors. This was further complicated by similar caste compositions in state administration, police and higher echelons of the media, which meant that misinformation became a by-product of the lack of diversity.

Further, on top of financial precarity, in a news cycle that is as quick as it is mercurial, the race to be first with a specific piece of news is a significant point of pressure. So one needs to have news first, to be the first to send it out on WhatsApp, upload it on their own YouTube channels (a major source of news for the public and the so-called ‘national’ media). There is also a lot of pressure on journalists to ‘have’ the news that others already do on their own channels.

Given the challenges that vernacular journalists must work with, and the rapidly escalating problems of misinformation within India; any study in the field of media policy will benefit from including the challenges faced by journalists in their work. It is also important to keep in mind the rapidly changing media landscape in India, where outside the shiny news studios of Delhi, on the dusty ground of the hinterland, the neat lines dividing the work of reporters, editors, photojournalists and advertisers can become blurred and sometimes even completely disappear.

Dhrubo Jyoti is a CPS Fellow for 2021-2022. He is a senior political editor at Hindustan Times.