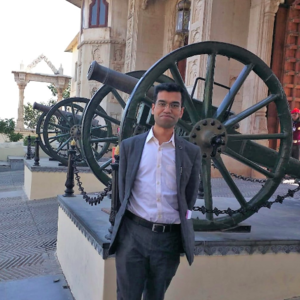 Anupam Guha is an AI researcher shifting to AI policy research. He finished his PhD in 2017, from the University of Maryland, in Computer Science. He has worked as an industry AI researcher for two years.

Dr. Guha’s arc of research started as a core AI researcher working in the intersection of language and vision who got interested in not just how humans solve complex problems but also how AI systems work and fail around these problems. This, and insights from his recent work in academia and the (media) industry, especially as to how code precedes policy, and the lens on AI primarily being one of fairness, accountability, transparency (instead of say, labour and capital) led him to develop an interest in AI policy, the interaction of labour with AI, and the political-economy of automation.

Topic A: The political economy of AI and its impact on workers/work (for both PhD/MPP)

Description: Artificial Intelligence, as a collection of technologies, has become one of the focal points in which work, wage, and the mode of production is evolving and thus needs to be critically observed. Not only is the development of AI dependent upon complex chains of physical infrastructure, code, labour (regular, crowdwork, and hidden), policymaking, and decisions both political and economic but the development of this set of technologies also has an outsize and deep impact into how work is done, how policy is made, and how the politics of future will evolve. In fact , platformisation which is one of the current dominant paradigms of how work is altering would not be possible in scale without vast collections of data being harvested for intelligence using machine learning. Platformisation is but one of the areas where AI is starting to have an influence, the project aims to look at all kinds of design, development, and deployment of AI which is influenced by or influences production relations. Artificial Intelligence is a techno-social system which has the potential to revolutionise production, distribution, and exchange by automating intelligent tasks workers perform. It represents a formidable policy challenge because never in history since the Industrial Revolution has technology had the potential for altering the relations between labour and capital in such a radical fashion. This has implications specifically for the Global South, Indian workers in particular because of the lack of data protection laws, loose labour laws, a growing AI industry, and untrammeled finance capital in India. This project aims to study how many ways AI impacts Indian workers to inform policy. The project also aims at constantly surveying extant Indian policymaking on AI and responding and improving upon them.

Topic B: The Automated Workplace: Digital Taylorism in India and abroad (for MPP)

Description: One of the consequences of the maturing of Natural Language Processing (NLP) and Computer Vision (CV) technologies which are sub areas of machine learning in the last ten years, especially after the improvements on deep learning models, better LSTMs, and improved word embeddings have been the proliferation of what are called Electronic Monitoring and Surveillance (EMS) systems. Currently in India these systems have not only become popular in the public sphere with multiple police jurisdictions starting to use Facial Recognition Technology (FRT) among other use cases, but also seeping into workplace situations up to and including automated monitoring of the day to day running of official computing systems. This use of AI and automated technology in general to surveil, standardize, regulate, and discipline worker action is called Digital Taylorism by Altenried (2020), a new paradigm of using these technologies by companies to reorganize the workplace. When one considers the workplace as the locus of such an automation of surveillance, it is not hard to connect the design, development, deployment, of certain AI and automation technologies to profit maximization via this route. This research project aims to critically survey the types and the nature of such systems being used in Indian workplaces and investigate how they are being used to modify workplace behaviour, alter conditions of collective bargaining, and influencing precarity. Using comparisons with use of such technologies in other countries this project aims to aid policymaking to counter the inequity these systems engender.

Topic C: What shapes the public and academic discourse around AI and its policy? (for both PhD/MPP)

Description: Policymaking on AI is a topic of vital interest to all contemporary states as the economic and political consequences of AI development are not trivial. While this field is still small and developing there is enough literature and scholarly work to indicate that examination and criticism of AI itself has been happening in a few interesting ways, has taken certain patterns, and almost nonexistent in others. For example a large part of policy discourse around AI is fixated on the concept of normative ethics which has led to conundrums of whose ethics, lack of accountability, and ethics-washing. A lot of work with ethics councils etc has reached a dead end with seemingly no useful result. Another stream of AI examination/criticism uses the framework of fairness/accountability/transparency which while instrumental instead of normative has so far failed in resulting in any substantive change in AI development because in many senses AI cannot be transparent or fair and even when it can be it is not something the profit motive allows. Yet another way of looking at AI criticism looks at its relationship to power or alternatively its political economy but this direction of research is very sparse and has a dearth of literature. More interestingly, a lot of big tech criticism is based on priors which seem to be not based on evidence. The question this project asks is why is discourse around AI of a particular type and seems to avoid political and economic questions? Is the funding behind AI criticism favouring some acceptable types of criticism? Are the compositions of the fora engaging in policymaking around AI stacked with a particular kind of stakeholders? Is there an influence of the AI industry in shaping how its own criticism is done, and how is this connected to policymaking and politics? In this research project we will use various methods, and observe the technology, politics, economics, and tropes of consensus building of AI criticism and attempt to find how policymaking around AI can be made better.