DISCLAIMER: This article was first published in Dhaara, an online magazine. It has been republished here with permission.

Any settlement is an inscription in space of the social relations in the society that built it… Our cities are patriarchy written in stone, brick, glass and concrete (Jane Darke, 1996)

The concept of the smart city has rapidly spread across the world. Along with this, there has been anexpeditious increase in smart city literature. This literature is often divided into two types, grey literature, which includes policy documents, reports and marketing material, and academic literature. While the former category is optimistic about how the smart city concept will transform cities of the Global North and South, the latter remains critical of the smart city approach as well as many of its interventions. What seems to be a commonality across the two categories, however, is the near absence of women. For grey literature this means that women are not adequately considered in smart city policies and projects, and for academic literature this means that thegender specific impacts of smart city interventions are not investigated.

In this article I will briefly discuss what a smart city is, following which I will delve into why it is important to consider women in smart cities both from a policy perspective as well as from an analytical perspective. I will also discuss the one area in which women are considered within the smart city paradigm, i.e. safety, and how surveillance interventions are introduced in response. I argue that by omitting women or reducing them to a single group and issue, smart city policies fail to capture women’s unique experiences as they navigate the urban. Furthermore, by overlooking the impact of smart city policies on women, academic literature leaves significant lacunae in its analysis of this approach to urban policy and planning.

What is a Smart City?

Urban policy makers and city planners have long tried to design and build cities based on scientific principles, employing the latest technologies. What sets the smart city apart, however, is the kind of technologies that are used and how they are embedded into every aspect of urban life. These digital technologies have the capacity to collect vast amounts of data which are then analysed real-time. This includes data about the city like traffic, weather, and air pollution, as well as citizen data which might include surveillance footage, movement patterns, and access to public services. Further, smart cities are often governed using algorithms and artificial intelligence, known as governing through code. Experts and technocrats are often involved in designing and governing these cities. Smart city proponents argue that smart cities are more efficient, sustainable, and equitable because of the presumed unbiasedness of these technologies and the technocrats. In other words, the smart city is presented as a scientifically and technologically advanced city which is apolitical.

India launched an ambitious smart city policy, the Smart Cities Mission (SCM) in 2015. This policy aims to transform 100 cities across the country into smart cities. The Mission attempts to reimagine the Indian urban landscape by building a model of ‘sustainable and inclusive development’ which can be replicated by other cities. While the Mission does focus on traditional urban infrastructure like water, waste management, and transportation, it also encourages cities to use digital technologies, collect data from various sources, and expand surveillance architectures.

The SCM guidelines specifically mention that citizen safety, especially the safety of ‘women, children and the elderly’ is an integral aspect of smart cities in India. Women are not mentioned elsewhere in the document.This focus on women’s safety in smart cities is not unique to India but is prevalent in smart cities across the world. GiorgiaNesti, in a 2019 paper, discusses this aspect in some depth. She finds that only a minute proportion of smart city literature addresses the question of women in smart cities in a significant way. Of these, the majority concentrate on women’s safety. In the figure below, taken from Nesti’s paper, we can see that while other issues like health and transport are discussed, safety remains the top priority. 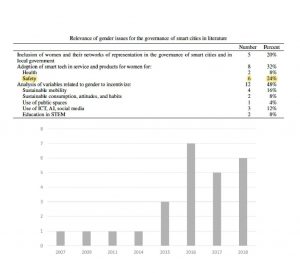 This is not to say that women’s safety in urban spaces is not an important issue; it is one of the most pressing issues. However, I would like to discuss two shortcomings with this preoccupation. The first is the proposed solutions to the issue of women’s safety within the smart city paradigm, and the second is the narrow way in which women are considered, which I will discuss in more detail in the next section.

Solutions to a lack of women’s safety in urban areas are usually focused on the use of surveillance technologies and other information and communications technology(ICT) interventions. Not only does such an approach fail to address the root cause of violence against women in public places and therefore fails to offer a curative solution. Such a technology-led approach, which is the mainstay of smart city projects, also fails to consider how technology itself is rarely gender neutral and can often exclude women’s experiences if not exploit them. When surveillance in cities increases, women are also surveiled and tracked more, making the state an extension of patriarchal familial, work, and public networks. This gender-specific impact of technologies has been largely overlooked by academics studying smart cities. Finally, these ICT interventions do not attempt to fundamentally change how cities are designed and governed; instead they simply form another layer of urban structures that exclude women. As Leslie Kern points out, ‘the additive approach to addressing exclusion has always lacked transformative power.’

Feminist scholars and geographers have long contended that cities are designed by and for men. Similarly, urban theory fails to incorporate women’s knowledges and where it does, often treats women as a singular, homogenous group. While this impacts all women, it most significantly impacts women at the margins, women from lower castes and classes, Muslim women, and queer women.

Like urban policy paradigms that have come before, the smart city largely excludes women right from the design stage. This is evident from the policy literature that exists. The dependence on technology runs the risk of available solutions leading the way in framing urban problems rather than the other way around. What such an approach fails to capture is the fact that women experience and navigate the city differently—and this is true for different groups of women as well. For example, the fact that most women have to balance household and parenting duties along with their jobs means that their commutes are not only between their homes and places of work (like it is for most men). Public transport, however, is designed to cover large distances in short periods of time rather than better connect places closer by like schools and markets.Apart from demonstrating how cities are navigated differently by women, this example, importantly, demonstrates that not all urban problems can be solved through technological interventions, at least not until they are properly understood.

Cities urgently need inclusive redesigning which can only come after the inclusion of multiple knowledges, experiences, and voices. Smart city policies refrain from moving in this direction and instead introduce a layer of digital technologies to inherently unequal and exclusive cities—and bring in technocrats to govern cities that they do not have specific knowledge on. While touted to be unbiased, ICTs tend to reproduce and reinforce existing biases and stereotypes. While academics do critique these characteristics of the smart city, they have thus far not studied how smart city policies uniquely impact different groups of women.

This article is a call to expand smart city policies and academic research to include women’s voices and knowledges. Without this, smart city policies run the risk of deepening inequalities and exploiting women. By reducing women to a single group and their urban experiences to a single problem with a single solution, these policies fail to reach their stated goal of making cities safer and more accessible to women. Researchers, on the other hand, must study the impact of smart city policies on women for a more holistic critique of the paradigm’s shortcomings and so that these policies can be improved upon.