Ashank Desai Centre for Policy Studies, IIT Bombay > Talking policy > What Makes Bear Grylls A Star And A Forest Guard Posing With A Cobra An Offender? 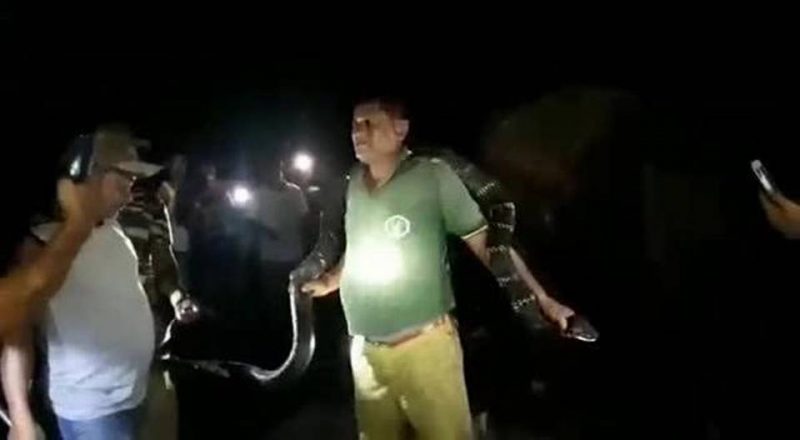 Note: This article first appeared in The Hindu, and is republished here with permission. The title has been changed.

It was perhaps the guard’s shot at recognition and fame in a world that is increasingly driven by the possibilities of instant celebrity-hood, even if only for a moment.

In the second week of September, news sites and newspapers carried a report with the pictures of a West Bengal forest guard posing with a just-rescued king cobra draped around his shoulder. The grainy pictures that went viral, taken most likely on mobile phones, also showed at least six other people clicking pictures of the guard with their phones, and the official clearly ‘posing’ for the camera.

The forest guard was eventually admonished and an enquiry has been initiated against him. There has also been condemnation — it was a dangerous act, unethical and could set a wrong precedent for common people, who might also then begin harassing and disturbing wildlife for such ‘photo-ops’.

While the forest guard perhaps knew he should not be handling the snake the way he did, the incident raises important questions. Why did he do what he did? Would he have done it if there had been no cameras around to record him?

Central to the entire episode is the idea of spectacle and performance. It was perhaps the guard’s shot at recognition and fame in a world that is increasingly driven by the possibilities of instant celebrity-hood, even if only for a moment.

Why did he do it?

This then becomes a self-perpetuating cycle. The posing is done for the cameras, the photos are circulated, they are then commented upon because they were taken in the first place.

The forest guard ended up creating an object for consumption, aided by technology that allows documentation and communication with a speed and a reach not conceivable until recently.

But there is also another answer to the question of why he did what he did. It is quite simply this: That he has been made to believe that it is possible. That it is okay. And indeed that it is an acceptable route to recognition.

One does not have to go further than Bear Grylls to see how this plays out. The show he did with Prime Minister Narendra Modi in Corbett Tiger Reserve was hailed for its conservation messaging and for simultaneously highlighting India’s tourism potential.

If there is one answer to how Grylls has achieved international stardom, it is the ‘spectacle for consumption’ that he has created through his television show Man vs. Wild (ironic in itself as a conservation message).

And if Grylls can drink snake blood, eat the heart of a moose or the eyeball of a sheep, all on TV, and yet (or perhaps because of this) get to do a show with the Indian Prime Minister, what’s wrong in the actions of this forest guard, who only occupies the bottom rung of the hierarchy? He was in any case only posing with a snake he had rescued, and one that, most probably, was released back into the wild.

Grylls becomes a star, while the forest guard becomes an offender — there is a completely different kind of food chain operating here. Conservation is a serious and complicated endeavour, and turning it into mere spectacle can only do it great injustice. Whether it’s done by Grylls or a forest guard.